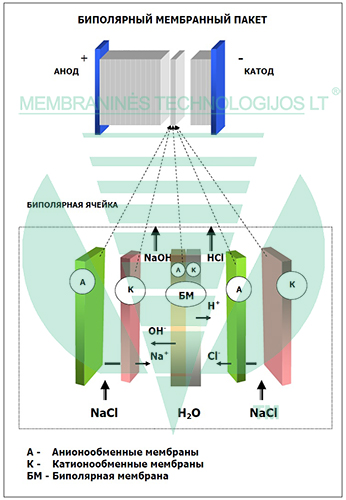 The process of water splitting (or bipolar electrodialysis) allows to covert water solutes into products with commodity value, such as acids and alkali, without any chemical additives.

Subsequently these products can be sold, processed or re-used in the technological process for direct acidification or alkalinization of the solutes without application of any additional reagents, while avoiding obtainment of by-products and necessity for costly cleaning activities.

Using the driving force of the electric potential, bipolar membranes have an ability to effectively split water to hydrogen ions H+ and to hydroxide OH-. H+ and OH- ions are then transported through cation exchange and anion exchange layers, forming bipolar membranes, in adjacent acid and alkali chambers, as illustrated in the scheme. In the three chamber cell/slot on the sides of the bipolar membrane, respectively, cation and anion exchange membranes are additionally arranged, able to selectively transport charged particles through itself and thereby perform splitting and concentration functions of the solutes. Cation exchange contain fixed negative charges, which allow to transport positively charged ions (cations) such as Na+ and Ka+, transporting/passing them though itself, simultaneously pushing away negatively charged ions. Accordingly, anion exchange membranes contain positively charged ions (anions), such as F-, SO4-, Cl- or NO3-, transporting them through and pushing away positively charged ions. Combination of traditional ion exchange membranes with unique properties of the bipolar membranes in one stack allows to realize the process of splitting of slats dissolved in water. Thus, letting the salt solute flow, for example NaCl, through the membrane stack with a simultaneous feed of direct electric current potential on electrodes, on the outlet of the apparatus alkali and acid are obtained, in this case - NaOH and HCl. Likewise, splitting of KF, KNO3, NH4Cl, Na2SO4, KCl and etc., and organic salts can be carried out.

Developers of electrodialysis (electromembrane) apparatuses and complex equipment, including special purpose equipment for pharmaceutical and chemical industries.
Different capacities – from laboratorial, pilot to industrial, as well as technological processes with electrodialysis method application.